Worldwide known as designer, fashionista and influencer, Santiago will let us into his most human side throughout the series as well as his life journey from his childhood in Ushuaia to becoming the fashion dynamo he is today. It is an extraordinary success story of overcoming adversity through which he always stayed true to his style and to the person he has chosen to be.

Santiago Artemis, at only 27 years old, has already become one of the favorite designers of some of the biggest celebrities:Katy Perry, Britney Spears, the Olympic athlete Jenny Dahlgren and Lali Espósito are just a few of the many stars who have worn his outfits among many others. 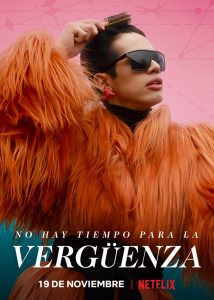 Synopsis
________________________________________________________________________
No Time for Shame follows the day-to-day life of the couture fashion designer, Santiago Artemis, who faces a great challenge at only 27 : creating a new collection that turns heads, conveys enthusiasm and positions Artemis as «the voice of the millennial generation». Through a first person account of the life and work of the eccentric Argentine fashion expert, we will be able to have a glimpse at his long hectic days full of clothes- fitting sessions in his atelier design house as well as his many sketches, trips and meetings with celebrities such as Angela Torres, Pampita, Xuxa, Oriana Sabatini, Nicole Neumann and Pablo Lescano.This is Artemis’s world and no one can stop him.

Available on Netflix since November 19.